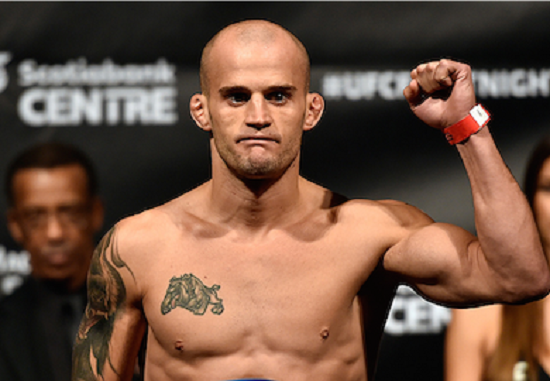 The bout is the biggest of Gagnon’s career, and he certainly plans on taking advantage of the situation.

He spoke to MMAFighting about his desire to submit Renan Barao, an elite level JiuJitsu black belt, as well as his shock when the UFC called upon him to fight the former champ in the co-main event.

“I was very surprised. I just thought that I wasn’t in the picture, that he would be reevaluating things with his team, but I guess he’s ready, and I jumped on the opportunity to fight him.”

“I’m not looking at that that much, but yeah, it definitely puts me on the map. It definitely takes me right up there. This is the biggest fight of my career, I’m fighting excellent champion, so it’s definitely huge.

“He’s been champion for years, he’s very talented, so I’m really happy to be fighting him.”

Many fans and critics noticed that Barao looked very different when he stepped into the cage against TJ Dillashaw earlier this year, and Gagnon wonders which Barao will appear when the pair fight on December 20th.

“I don’t know which Renan Barao is gonna come out. I’m not really thinking about what keeps him motivated. That doesn’t concern me. What concerns me is what I’m going to do, put my time in the gym and make me sharp ready for Dec. 20.”

“Yeah, I definitely think I can (submit Barao). I will put the pressure on him and if he makes any mistake, I’ll definitely getting a submission.”