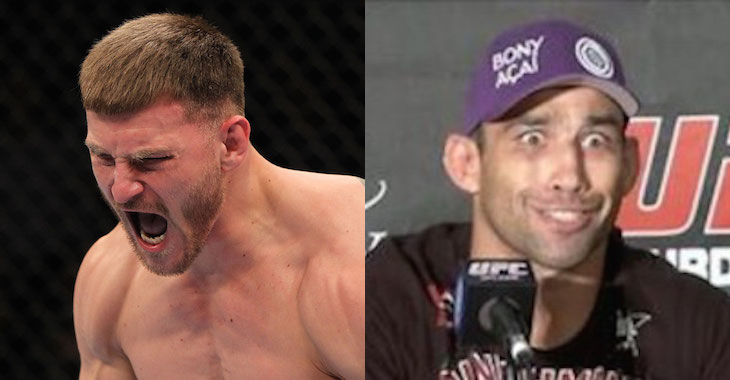 Fabricio Werdum did the unthinkable at UFC 188 when he stepped into the octagon to challenge champion Cain Velasquez for his belt. Velasquez was outclassed and outperformed and Werdum ultimately submitted him in the third round to become the new UFC Heavyweight Champion.

Werdum, usually the underdog, is now walking into his first championship defense as the likely favorite. Whether he fights Andrei Arlovski or Stipe Miocic, the bookies will see the odds in his favor and Miocic is looking to prove them wrong.

“He hasn’t fought someone like me before. I bring a lot to the table and I’m gonna walk in there and I’m confident I’m gonna win the fight and I’m gonna be the next heavyweight champ,” Miocic told Submission Radio.

Miocic acknowledges Werdum’s grappling accolades, but is confident he will be able to control him with his wrestling. “His ground game is amazing, his stand up is real good too [but] I’m faster than him, I move better than him, I got better stand up. He’s really good on the ground, he’s a black belt, but nah, I’ll definitely use my wrestling. I’ll be smart about it and not put myself in any bad positions, but I think anywhere it goes I’m comfortable with and whatever he brings to the table I’ll be able to handle.”

If Stipe Miocic is, in fact, Werdum’s first challenger who do you think would win? Share your prediction in the comment section below!