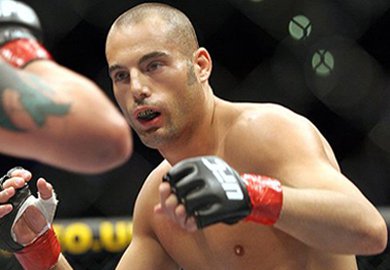 It wasn’t THAT long ago when UFC veteran Mike “Quick” Swick (15-5 MMA, 10-4 UFC) found himself perhaps just one victory away from challenging for the UFC’s middleweight title.

After defeating David Loiseau in September of 2006, Mike Swick was then tasked with battling Japanese juggernaut Yushin Okami at UFC 69.

After being smothered for 15 minutes, in a losing effort to his larger opponent, Swick made the decision to shed some weight and try his luck at 170 pounds.

In the beginning, it looked like the best decision Swick had ever made. “Quick” promptly won his first 4 fights within the welterweight division, including a 33-second starching of Canadian Jonathon Goulet.

Then things started to go wrong for the former TUF season 1 competitor. First, Swick suffered back-to-back losses to Dan Hardy and Paulo Thiago. Then the American Kickboxing Academy (AKA) product became ill, suffering from esophageal spasms, that would sideline the fighter for over 2 years.

When Swick was finally healthy enough to return, he did so in dramatic fashion, knocking out Damarques Johnson in the second-round of their UFC on FOX bout last August.

Mike was then pitted against fast-rising welterweight Matt Brown at UFC on FOX 5 this past December. Unfortunately for “Quick” fans, Mike was unable to make it 2 in a row, as he was defeated by Brown via second round KO in their main card contest.

Now, it appears that Swick has decided to return to the UFC’s middleweight ranks, as he took to twitter to make the following statement:

No date or potential opponent has been named for Swick’s eventual return to the middleweight division. Who would you like to see Swick face at 185? Sound off Penn Nation!