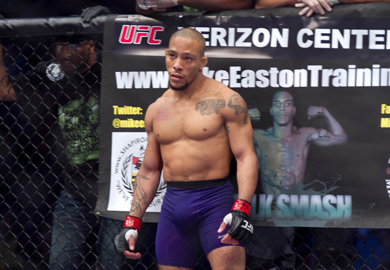 Mike Easton was a guest on the MMA Fight Corner on Friday night. He revealed that he’s ready to contend for the bantamweight title. Though his Alliance MMA teammate Dominick Cruz is currently the UFC bantamweight champion, Easton said he’d have no problem fighting him. While Cruz is still rehabbing from an ACL injury and Renan Barao is the the interim champ, Easton said Barao shouldn’t be holding the belt hostage by not defending it.

“If you guys could see us spar…man it’s a war every single time. And it’s his style versus my style every time we spar and it’s a good time, and so we enjoy it, we just enjoy training. Of course you know, he’s the champ. If I keep doing my job right, which I am, we’re going to have to face each other. We already know that. And that right there will be history in the making for two teammates to fight for the title. That’s something that’s never, ever been done before and that’s something that me and him are both looking forward to.”

“Right now, everything that’s happening in the 135 division, it’s like, it’s crazy because you have all these top guys that are fighting each other right now. These guys have to fight each other to see where the placement is. As far as me, I’m just going to do what I have to do, and right now my focus is on my fight for next week. And that’s what I’m focused on and that’s what I’m going to do, that’s my job right now.

“Now, as far as Renan Barao saying he’s going to hold onto the belt and wait – no, he can’t babysit the belt. Me personally, I’m like, ‘No, you can’t do that buddy’. Our job is to fight, our job is to put on a show for the fans – that’s what they pay for and the UFC pays us to fight. So you can’t babysit the belt unless you’re hurt or you’re injured. And if you’re hurt or you’re injured, I’m pretty sure you’re going to have to give that belt up and that’s just what it is.

“I’m a patient fellow, I’m not in a rush. I’m enjoying fighting in the UFC and that’s what I’m going to do. I’ve had two years off so I’m taking my time and I’m going to enjoy it.”