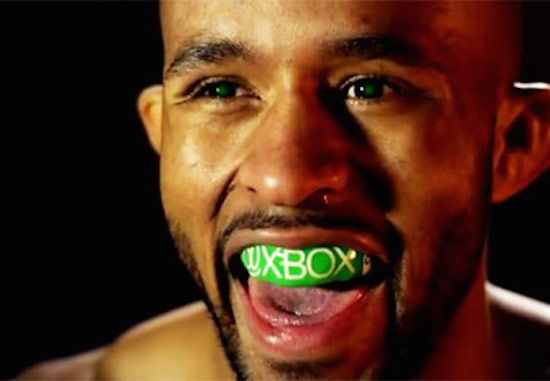 “Obviously I can’t wear Xbox in the octagon anymore, so there’s nothing I can do about that. We’ve been talking to Xbox and Microsoft and all that stuff. We hope they keep me on outside. Whether they want me to go out and do promotion of games and stuff – for my last fight for ‘Call of Duty,’ I went down to L.A. and did a viewing party, went to San Francisco to work on the games – so I’m hoping I can do a lot more of that stuff outside the octagon where they have to keep me.”

“A guy like Nick Diaz, for example, comes out with all his Metal Mulisha, all his sponsorships. Let’s say from those sponsorships he makes like $80,000 to go in the octagon. That’s a nice payday just for wearing sponsorships.

“Lets say the UFC says, ‘Hey man, you’ve got to wear Reebok tomorrow.’ And he says, ‘OK, that sounds good. Here are all my pay stubs and my contracts for my last fight. They’re paying me $80,000, so what’s Reebok going to pay me?’ They say, ‘You’re ranked second in the world, so we’re going to pay you $2,000 to wear Reebok.’ For me, I think that’s not necessarily fair because there’s basically $78,000 that’s unaccounted for. If UFC’s going to compensate me with the same amount, that’s fantastic. If not, that’s a big boo-boo.”

“I think everyone would hope (they’re paid the same or more as before), whether they’re the champion or not. I would hope the person on the prelims card who is ranked 20th in the UFC, if they’re making $10,000 from Dynamic Fastener, I believe they have the right to be paid that. That’s just me being an honest person.

“If the person can show what they are making and this Reebok deal isn’t making the same, they should be making it right. That’s my take on it. I support the UFC, I’m happy for this deal, and I hope it helps out a lot of fighters, including myself.”

In a recent interview with MMAJunkie.com, UFC flyweight champion Demetrius ‘Mighty Mouse’ Johnson discusses the UFC’s new Reebok deal and how that may affect his longtime deal with Microsoft’s XBOX.

Is he right, should the UFC take into consideration a fighter’s last sponsor pay?