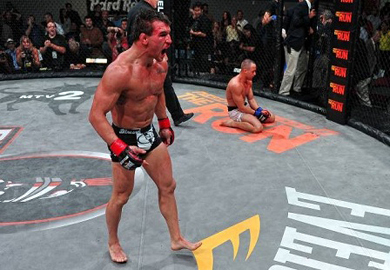 Former Bellator lightweight champion Michael Chandler must have caught wind of Gilbert Melendez’s recent contract negotiation struggles with the UFC, as he recently tweeted the following:

@MikeChandlerMMA: Seeing this news about @GilbertMelendez has me excited. Who wants to see me welcome him to @BellatorMMA after I beat Eddie?

Chandler will face Eddie Alvarez for a third time later this year in a yet to be announced Bellator pay-per-view event.

The former Strikeforce lightweight champion, Melendez, would obviously be a welcome addition to Bellator’s lightweight division, but this is all merely speculation at this point.

If the UFC can’t come to a deal with Melendez, would you like to see “El Nino” fight under the Bellator banner? Let’s hear it Penn Nation!