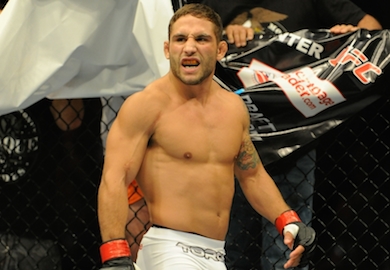 Chad Mendes is gearing up for his UFC 179 rematch against Jose Aldo for the featherweight title. Leading up to the bout, both Mendes and Aldo have fired verbal shots at one another, highlighted by Aldo shoving Mendes when the two had their first staredown several months back.

Mendes joined Ariel Helwani on The MMA Hour to discuss why he believes he is in Aldo’s head, and why he doesn’t believe that Aldo shoved him just to sell the fight.

“For me it’s basically me thinking I’m in his head, man. We’ve never seen Aldo do this with any opponent. I think he feels threatened in his head, which is right where I want to be. When you get into a stare-off and the guy shoves you or pushes you, it’s kind of funny to me. That’s our job, and that’s what we’re supposed to do. If you don’t want to be there, don’t do the damn stare down. It’s just funny to me to see him get frustrated and lose his cool.”

Mendes was then asked the question on every fan’s mind, what does he think of Conor McGregor?

“Honestly, the guy talks a lot of s–t, but I think he’s great for the sport. It’s an eye-opener for a lot of people to bring that much recognition to the featherweight division and to the sport of the UFC. I think it’s great. But don’t get me wrong. I would love to punch this dude right in the face.

“He’s a big talker. He’s got the skill set to back it up, but I don’t think he’s on my level yet. I’d like to see him get in there with somebody who has a little bit of a wrestling background. I think a guy like Dennis Bermudez, honestly, would beat him. I think a guy like Clay Guida, and even Nik Lentz, I think all three of those guys would test him very, very well, and most likely beat him.”

All that being said, many fans assume that if Mendes beats Aldo later this month, Aldo would be given an immediate rematch, something Mendes says isn’t the case.

“If I go out there and beat Aldo I would rather fight a bigger name like Conor. Not necessarily a bigger name, but a guy with a bigger draw like that. Like you said, that’s going to be a ton more money. It’s going to be a way bigger recognition fight. And I think it’s going to be huge for the featherweight division. We’ll cross that road when it comes, but I think that’s a great idea.”