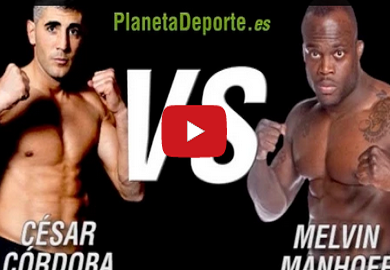 Bellator’s newest fighter Melvin Manhoef competed in a kickboxing match this past weekend and was on the receiving end of a pretty brutal TKO.

At around the 10:35 mark Manhoef gets rocked with a head kick, and it smashed until around the 10:45 mark where he falls face first on the canvas. Somehow the ref lets the fight continue and immediately Cesar Cordoba continues his onslaught, which eventually leads the ref to stop the fight, much to the frustration of Manhoef who can be seen wrenching himself away from the referee’s grip.