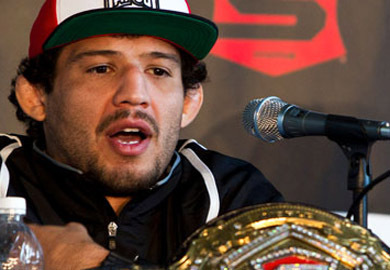 gam·ble /ˈgambəl/
verb
1. play games of chance for money; bet.
2. take risky action in the hope of a desired result.

That’s right! I totally just started out this story with the definition of ‘gamble’ … Because that’s exactly what Gilbert Melendez did last week and it paid off for him in a major way.

Forget the record-breaking contract that ensures his financial freedom for life, or the fact that he booked a coaching stint on TUF attached to another lightweight title shot. Gilbert Melendez did more than that. He played the odds and beat the UFC at their own game last week, by taking his free-agency to Bellator and in doing so, securing a very lucrative contract that will likely change the industry standard going forward.

Gil’s the man for that!

He’s also the man for sticking to his guns at the risk of losing every fighter’s dream of fighting in the UFC’s Octagon.

Here’s how he explained the ordeal to MMAJunkie.com:

“It was on a conference call and I had to put them on mute. I was just smiling and yelling and dancing around like a little girl. I was just really excited.”

“It’s a tough thing to do, but I never wanted to walk away. I never wanted to leave the UFC. It’s the best organization in the world, has the best fighters in the world, it’s where I wanted to be, but I had to put that aside to think about my family and my future. …I had to weigh it out and I had to explore my options. I got to a point where I had a good plan for my future, and I just had to hope that the UFC would come along with me so I could get to that point and still be with them.”