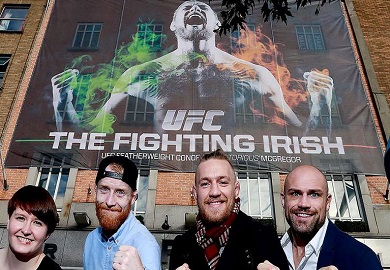 Conor McGregor has been one of, if not the quickest rising star in the UFC. Having a 4-0 record in the UFC, with his recent win coming over formerly ranked #5 Dustin Poirier, McGregor’s name has been thrown in for talks of the next title shot.

‘Notorious’ has no doubts about what he wants to do next however, with a new ‘UFC: The Fighting Irish’ billboard hanging in Dublin, McGregor wants a title shot against the winner of Aldo vs. Mendes II in Ireland. He then plans to defend the belt, and then move up in weight to fight for the lightweight belt.

“If you do what you say you’re going to do look what happens? I’ve skipped the queue and now I’m the world title contender, I’m number one contender. My next fight is most likely going to be for the title. After that there will be no catching me,”

“If a 155 fight came up I will take it. I’m only gone 26, I’m not going to be making featherweight my whole career, it’s a tough cut. I do it and I do it professionally, but it’s tough.”

“I’ll win the belt, maybe I’ll defend it in the Aviva and then I’ll challenge for the lightweight belt, then who knows? That’s definitely in my plans, you better believe that,”

“It’s going to be in the summer. I’ll win the belt, possibly in January or February in Vegas and then I’ll defend it in the Aviva in June or July. It’s definitely in the Aviva next summer.”