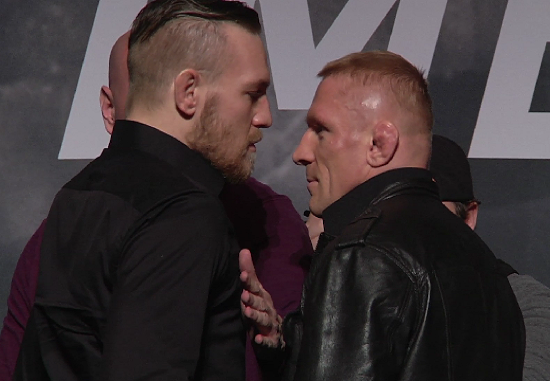 Conor McGregor and Dennis Siver are gearing up for their UFC Fight Night Boston bout in January.

Leading up to the event, the pair visited Boston to promote the fight with a press conference. Unsurprisingly, McGregor continued his trash talk, mocking Siver for failing a drug test.

“He’s muscular but he’s really small. He’s a weird looking, deformed looking guy. He was caught cheating at one stage in his career. He was on the steroids and he got banned for it so I think when you take some of the stuff like that your body becomes weird. You look weird, especially when you come off it. Even your head, I believe. So I think he’s a weird looking little German guy and I’m going to go in and whoop his ass in beautiful Boston City. ‘Ireland No. 2’ I like to call it.”

Do you think McGregor will be able to defeat Siver come January 18th?