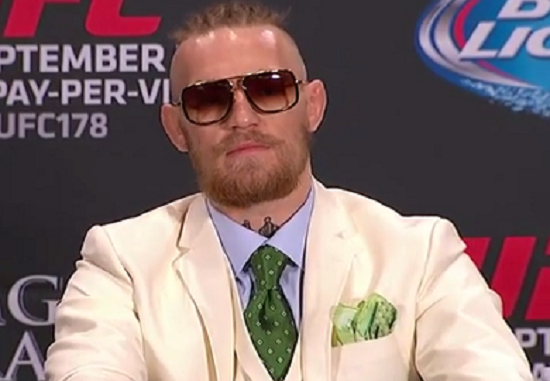 Conor McGregor attended UFC 179 last night in Brazil, with a close eye on the main event between Jose Aldo and Chad Mendes, where Aldo defended his featherweight strap (Watch the highlights HERE).

McGregor spoke at the UFC 179 post show to discuss the main event saying:

“It was a phenomenal contest. I showed my respect for both competitors. They put it all on the line. They slugged it out, that Thai style; you hit me, I hit you, we stand and we trade. It was beautiful to watch the fight,”

McGregor sees holes in Aldo’s game however, holes that Chad Mendes was semi-successful at exposing throughout the fight, battering the champ, and giving him his toughest test to date.

“I believe he can be hit, but he showed his heart. He showed his will. He showed his frustration as well at times. He was looking toward the ref and things of that nature. I believe he got frustrated, but it was a great contest. I have nothing but respect for anyone that gets in there and lays it on the line. (But) I feel if I connect, it will end. That is the difference between myself and these people.”

“You can’t stand flat-footed. You can’t stand in front of me like he did there. You can’t stand there. One or two clean shots from me and it is all over. I don’t need to hit you clean. It just needs to be anywhere. I definitely saw holes in the game. My confidence is sky high looking at the contest.”