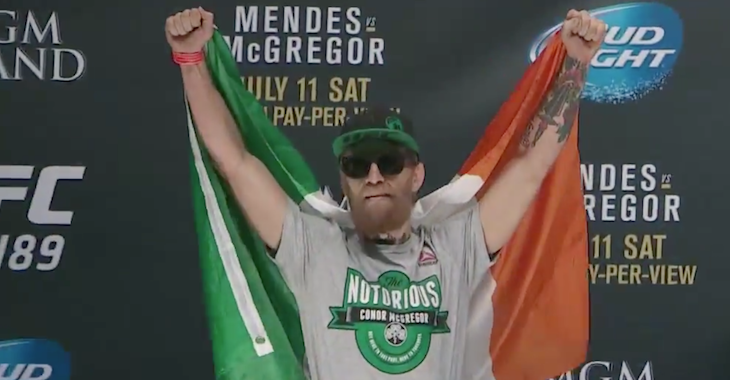 Sonnen, on the recent episode of his podcast, You’re Welcome, told the story of Conor McGregor refusing to wear the official Reebok ‘UFC Fight Kit’. McGregor and no one from the UFC have confirmed or denied the tale, so right now we only have the original OG’s words to go by.

“Conor did not wear Reebok (at the Mendes weigh in). He wore something else and behind the scenes they were giving him his Reebok kit. He refused to wear it. They said “Hey, you have to wear this” and McGregor said “I’m different, I’m not like those other guys. I’m not wearing it”, so they get out the Contract and everything and they tell him “you have to do this” and Conor said “I’m not doing it”. When the weigh in rolled around he did not wear the Reebok stuff.”

It should probably be said that McGregor did wear Reebok at the weigh-ins, just not the fight kit like everyone else. He wore an exclusive shirt that’s part of his individual contract with the apparel company. Also, after he won, Dana White gave him a championship shirt to wear. McGregor did not wear it, instead just wrapped the flag around him. Then, at the post-fight press conference he wore a suit. Hmmm.
BJ Penn, Matt Hughes, & Frank Trigg Talk Fighting… Eachother — EPIC! – AMAZING! – MUST WATCH!