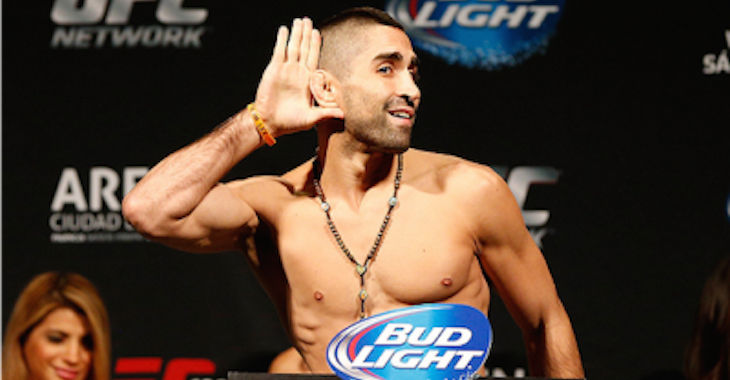 McGregor has been quiet about the video since it was posted, but was asked his thoughts about it during the post-fight press conference last night in Boston.

“You have rookies – p-ssies – making these little videos. Ricardo Lamas’ video – holy Jesus. Think of the amount of effort he went to make that stupid video, and then Jose (Aldo) making these posters.

“They all think it’s fun and games. I’m not playing here, and now, it’s time. We have a location. Now Jose is next in line. He will be the next one to learn it’s not all talk, and it’s no joke.”

“I swear, I can’t even get over that video. It was the most ridiculous thing I’ve ever seen in my life. I looked down into the crowd. I seen 40 chins, and then I climbed up those 40 chins and it was Ricardo Lamas. So I gave him the finger, as well.

“I saw him in the hotel with a big box of pizza, and I’m talking a 22-inch pizza, and on top of the 22-inch pizza was a big can of Pepsi or Coke – who are we signed by, Coke or Pepsi? If we’re not signed by them, cola. You know what I’m saying. He’s a big fat mess, making stupid videos. Get in the gym and perform impressively and climb up that ladder. You fought like a p-ssy when you fought Jose. So he’s a p-ssy.”