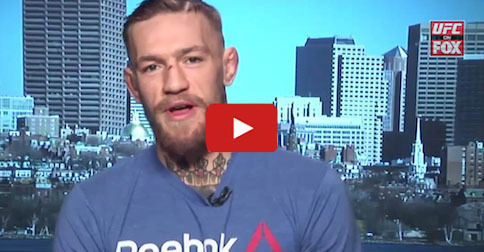 “Can you smell that money? I’ve partnered with Reebok. It’s a big step forward in my career and I’m honored to be with this brand. I’m honored to be one of the athletes that Reebok has chosen to get behind. I will prove that by going out and performing in phenomenal style.”

Conor McGregor on the cut on his nose: “It’s absolutely nothing. It’s a little graze. I don’t even remember it happening.”

Conor McGregor on his confidence ending the fight quickly: “I enjoy pressure. I like the feeling and illusion of pressure. Where the prediction has come from, I analyze my opponent. The shot I need to put him away, it’ll happen four or five times over within the first two minutes. It could be the first exchange. The way he moves, he will not take what I give.”

Conor McGregor why he’ll be the guy to beat Jose Aldo: “I don’t base myself on past people’s attempts. In my mind, I’m a two weight world champion. I vacated those belts when I signed with the UFC. In my mind, I’m simply contesting for those belts again. I’ll dispatch of everyone they put in front of me. I feel different. I’m a much different athlete and my approach is different. For me, it’s another clean sweep. It’ll be as easy as it always is.”