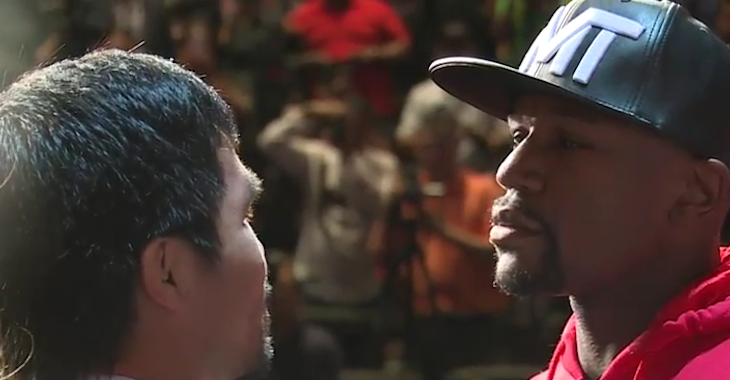 In case you didn’t know, which it seems like a lot of people don’t, Floyd Mayweather will be fighting tonight (Saturday) against Andre Berto, live on Showtime PPV.

The fighters weighed in yesterday and made things official. After the weigh-in, Mayweather did a short interview and was asked about his fight with Berto. Mayweather’s response? Of course he had to take a shot a Manny Pacquaio and blame him for their boring fight.

“I’m in top condition, we had a great training camp, it went tremendous but the main thing tomorrow is going out there, being at my best. Since Pacquiao didn’t give the fans a good fight, tomorrow’s going to be a great fight.”

I might be going out on a limb here, but I’m pretty sure the vast majority of people who watched that fight would point to Mayweather as the main reason it didn’t really live up to the hype.

Anyway, this is supposed to be Floyd’s last fight, but you know how those things go.