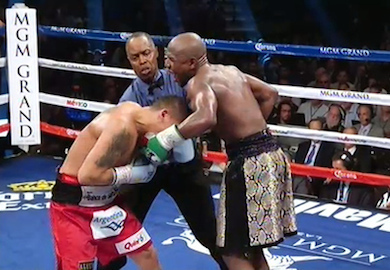 Floyd Mayweather defeated Marcos Maidana this past Saturday, and extended his undefeated record to 47-0, silencing the critics who doubted his first win over Maidana. During the course of the fight, Mayweather accused Maidana of biting him through his glove.

Mayweather claimed after the fight that his fingers were numb from Maidana’s bite.

Now, with a statement that is sure to spark outrage in the MMA community, Mayweather said Maidana and his dirty moves need to make the move to MMA, because “it is extremely dirty.

His words via Bad Left Hook:

“He’s just a rugged guy. Rugged, dirty fighter. That’s Maidana. That’s how he fights. I was like, ‘Man, this dude continues to fight dirty.’ My finger is busted. This is the finger he bit through the glove, it busted open. I checked with the doctors in the back after the fight, they said everything is okay. I just can’t believe this guy bit me.”

“I think he needs to move over to MMA…It is extremely dirty.”