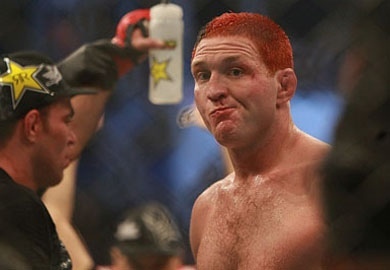 Fight Hub TV recently spoke with recent retiree, Jason ‘Mayhem’ Miller, asking him who he thinks makes the better promotions for a fight between himself and Chael Sonnen:

“I don’t know. I almost think Chael does, only because he’s got a lot of pre-written bits,” said Miller. “I’m going to start writing from now on and really focusing my writing on making hilarious promos. I feel like that’s the only way to beat Chael in the promo game.”

Although Miller has always sported some pretty elaborate antics, he believes that these acts help the sport, rather than detract from it.

Miller recently retired after being cut following his UFC 146 loss to C.B. Dollaway which was proceeded by an undisclosed incident backstage.