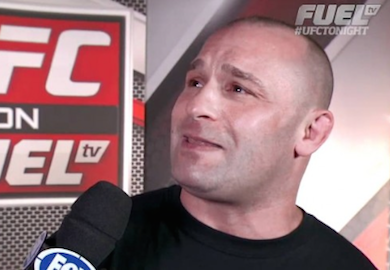 “After I got done fighting, I was always on the mat six days a week. So I got on the TRT. I had some back issues, I’m always on the mat and I figured I’d get my levels checked because I had some guys going who were around my age or a little bit older. So I went to the doctor and my things [levels]were at 300, and I was like ‘wow, so I’m a candidate? As long as I’m not fighting, who cares?”

…It is funny. I don’t know why my levels were [that low]. Usually you get low stuff [testosterone] because you have done stuff. I’ve never done anything. Never in my life. TRT is fun. The thing is I’m retired now man. I get a shot in the ass. I go to a legit place once a week. I got tested man and that shit was low. I’m not doing it in a back alley. I’m at a legit doctor’s office.”

In a recent interview with ‘The MMA Hour‘, Matt ‘The Terra’ Serra admitted he’s been using TRT in his post-fighting life.