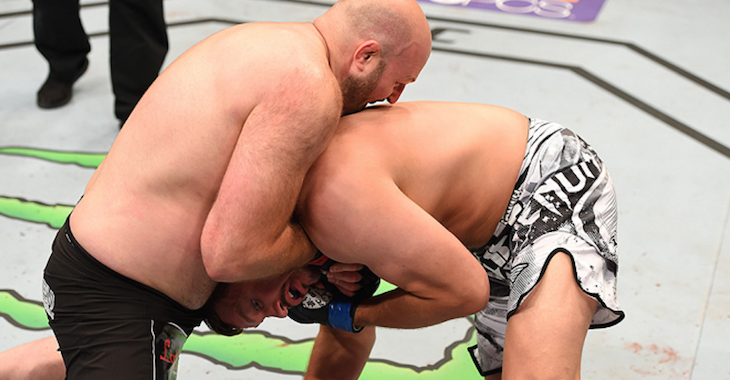 UFC heavyweight Matt Mitrione is probably his biggest critic, especially when it comes to his recent loss in the octagon, this past Saturday.

Mitrione went up against Ben Rothwell at UFC Fight Night 68. Like most fights on the card, this one didn’t last very long. Most expected Mitrione to keep the fight on the feet and look to use his speed and movement to gain an advantage. He did do that, until he didn’t, then he loss.

The heavyweight decided to shoot in, which looked more like a football tackle, and try to take Rothwell down. He failed and instead Rothwell grabbed ahold of his neck and locked in a choke, forcing Mitrione to tap.

‘Meathead’ took to Twitter to express his disappointment in himself and blames a split second decision that ended up backfiring.

I'd like nothing more than to hide my face, but that won't accomplish anything. I'ma striker, it showed. Not wrestler, that showed too.

Fully believe that I'm the best, most dynamic striker w TDD in my division. I made a split second dec. I'll be slanging heavy leather soon

Do you consider Mitrione one of the best strikers in the division and who would you like to see him fight next?