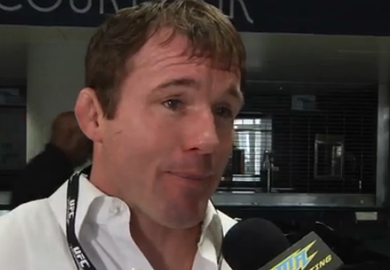 “(It’s) A trying day for me. I knew the retirement was coming, but as a competitor, you hate hanging the gloves up. So, not real happy about it, but the way it is, everybody’s gonna grow older and I’m just excited to still be a part of the UFC and going to fill this role of Athletic and Government relations. Dana has always been, sometimes he’s the boss, sometimes he’s a brother and sometimes he’s a dad. He came to me, with my wife, and said, ‘Hey, you don’t need to compete anymore. I’ve got a position for you, we’ve been looking to fill it. You fit the role perfectly.’ In the end, he’s right, he’s right. When you lose the last two like I did, where I think if the fight would have went all 15 minutes I would have won both of them, he’s right. I’m just glad I’ve got a position here to keep me in the sport. If he hadn’t said that, I would have already had (another) fight under my belt.”

“Whenever they put a mic in my face, I always said and did what I wanted. I never was anybody’s puppet. So, I’m going to do what I think is right and they want me to do what’s right. They want to understand what’s going on in a fighters mind sometimes. So, yes, I’m going to draw a paycheck from the UFC, but I’m there to give my perspective on whatever it is that arises. I don’t think they have to worry about me siding with them and I don’t think the fighters have to worry about that either. I’m going to do what I think is right.”