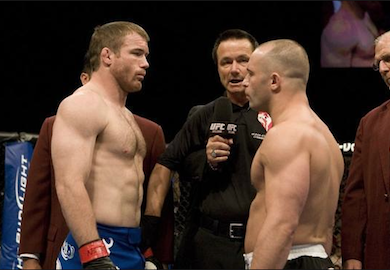 Back in 2009 Matt Hughes and Matt Serra engaged in a ‘Fight of the Night’ earning battle.

The two former champions fought to a very close decision that swung the way of Hughes.

Now both retired, the two took to twitter recently and after a back-and-forth appear to have agreed to fight.

Will Dana and the UFC brass allow this rematch between two legends to go down? Who knows. I don’t even know if both men were serious, but they did discuss it and they left it with a ‘Call Dana’.

Matt Serra ‏@MattSerraUFC
@matthughes9x @AmberLMatthews haha yeah bro I’d put down the pasta for a chance to smack u again. Prob need a 5 month camp but would love 2!

Matt Hughes ‏@matthughes9x 57m
@MattSerraUFC @AmberLMatthews talk to DW. If he says yes then I’m in.