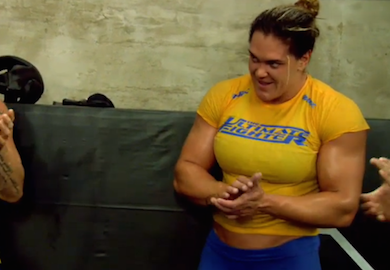 In a recent interview, the UFC’s leading lady was in usual form, and explained  her abilities in regards to her position among the world’s leading submission artists. (More on that HERE).

It’s because of those comments that, multiple time world champion, Gabi Garcia (pictured) has thrown out a challenge to UFC 175’s co-main event fighter.

“I rather believe she didn’t know what she was saying. It’s not possible for someone to display such a lack of humbleness. She disrespected jiu-jitsu as a whole. The first quality of a champion is to be humble and to respect others. As my professor Fabio Gurgel said, I’m ready and at her disposal to fight her under any rules, with or without gi.”