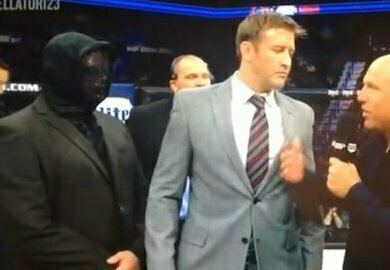 “[Tito has] owed me and hasn’t even made an effort to make good on it, so I really have no allegiance, and Bonnar’s a real solid dude. I thought, if I’m going to help anybody out on this one, I’m going to help the guy that called me first.”

“I went to his house and talked to him. (Ortiz’s former wife) Jenna (Jameson) was there a couple of different times. I talked to him in Big Bear (Calif.). It was just one of those things where you’re watching a guy blow 25 grand on the blackjack table, he owes you less than that … bro, what are you doing? “He’s the one who called me and told me what he was offering me to come aboard and train, and he only did that because Marc Laimon tried to charge him double what he offered me, and when he offered it to me, I accepted it on a bro deal and just decided to help him out. I left my family and moved out to wherever his camp was, helped him through eight, nine camps, and we had great success together, too.

… If you ask anybody that’s had dealings with him, they’ll let you know there’s a story they have where somewhere along the line … the guy took advantage of you when he shouldn’t have, and it’s more than often financial. This is definitely his own recipe for disaster. He made it, stirred it up, put it in the oven, and now he’s eating it.

“He made eye contact with me (during the brawl) like, ‘What are you doing, bro?’ And I was like, ‘You know what I’m doing,’” McCully said. “Oh yeah, big gestures. He was like, ‘It’s going to come around,’ and I informed him, ‘No Tito, it’s coming around. You sent this around. If you handled your business and did what you were supposed to do and were a good friend to everybody like they were a good friend to you, this wouldn’t be in your face right now.’”