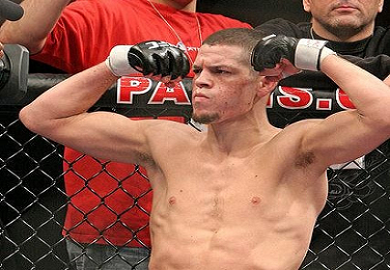 Nate Diaz’ manager Mike Kogan spoke to mmajunkie.com about Nate’s controversial tweet in which he said he’d be unable to fight Gray Maynard at the Ultimate Fighter 18 finale because of his high school reunion.

Kogan said Nick meant he wanted to fight Maynard in their rubber match two weeks later at the UFC on Fox 9 card which takes place in Sacramento California.

“It has nothing to do with the reunion or not reunion. He would like to see if he could fight on the Sacramento card. It’s only two weeks later. It’s closer to his house; it’s like fighting in your backyard with more fans. That’s really what it’s about.”

The Ultimate Fighter 18 finale takes place on November 30th in Las Vegas whereas the UFC on Fox 9 card takes place two weeks later on December 14th in Sacramento California, much closer to Diaz’ hometown of Stockton.

Maynard an Diaz have met twice before in the Octagon. First on season 5 of the Ultimate Fighter when Diaz submitted Maynard. Then 3 years later he dropped a split decision to Maynard.

Diaz is on a two fight losing streak, losing to former champion Benson Henderson and most recently Josh Thomson. Maynard on the other hand is coming off a knockout loss to TJ Grant.