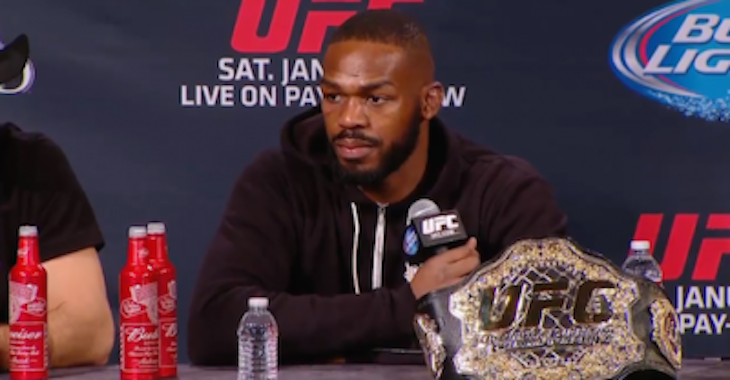 Jon “Bones” Jones was stripped of his UFC Light Heavyweight Championship and suspended after running into legal trouble yet again. Jones allegedly abandoned the scene of a hit-and-run where a pregnant victim suffered a broken arm and turned himself in a day later.

UFC officials were not happy with the way the situation was handled and Jones was punished. Now, Jones’ manager Malki Kawa says that he thinks the UFC was wrong to strip him of his gold.

While on the “MMA Hour”, Kawa told MMAFighting, “Jon Jones won that belt inside the Octagon. Nobody beat him for that belt. That’s just one case in itself. But on the other hand, we’re jumping to a lot of conclusions. We haven’t let things play out. He hasn’t had his day in court and I don’t think it’s OK to just hand punishments down like that. But I do definitely understand where the UFC, sponsors and everyone is coming from. I can totally understand.”

After Kawa stated he understood the suspensions, Kawa admitted that he thought Jones should have kept the belt. “…I definitely just don’t agree with the belt being stripped, because if this gets resolved in the next 60 to 90 days, then what?”

Despite being granted permission to travel, Jones is still officially off of the UFC 187 card.