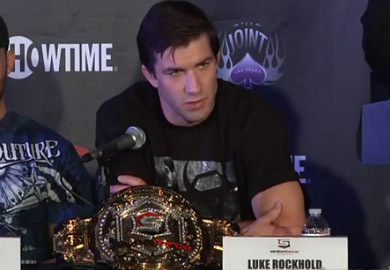 The final Strikeforce event set for January 12 has lost another bout to its roster.

Strikeforce middleweight champion Luke Rockhold has been forced to withdraw due to a nagging wrist injury.

The show was dubbed “Strikeforce: Champions” but with the loss of Gilbert Melendez earlier in the month and now Rockhold, the champions on the roster are thinning at a rapid rate.

The champion was scheduled to face division standout, Lorenz Larkin in the final Strikeforce cards co-main event until the bout received a bump up to main when Gilbert Melendez bowed out of his fight against Pat Healy.

Since his 2008 debut with the promotion Rockhold has gone 9-0 including two successful title defenses.