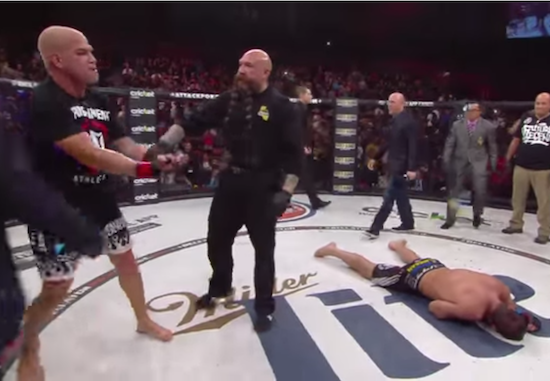 In Mixed Martial Arts, the traditional grudge match usually dies with the culmination of a fight.

In the case of Ortiz vs. Bonnar, that didn’t happen.

MMAJunkie.com got the story from Bonnar:

“Afterward backstage, those two got into it; Tito’s like yelling at him, ‘I’ll kick your ass for free, McCully,’” Bonnar said. “And it didn’t stop there.”

McCully, who appeared alongside Bonnar, said Ortiz had the two of them blocked from the VIP section of a post-event party and that Ortiz called the cops to keep them out of the club. He said Ortiz then left the club while they were talking to a large group of police officers who’d shown up.

McCully and Bonnar then both accused an Ortiz security guard of impersonating a police officer to get them out of the party.