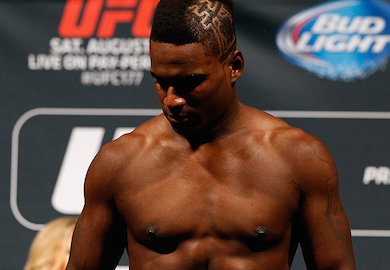 A welterweight scrap between Lorenz Larkin and John Howard is the latest addition to January’s UFC Fight Night 59 event in Boston.

John Howard (22-10 MMA, 6-5 UFC) will be looking to rebound from a 2-fight losing skid when he battles Larkin this January in his hometown of Boston. “Doomsday” was last seen in action at September’s UFC 178 event, where he suffered a decision loss to Brian Ebersole. Since returning to the UFC in August of 2013, Howard has gone 2-2, which includes a win over highly touted middleweight Uriah Hall.

Meanwhile, Lorenz Larkin (14-4 MMA, 1-4 UFC) will likely be fighting for his job when he makes his welterweight debut against Howard this January in Beantown. “The Monsoon” has lost 3 straight fights and four of his past five overall. Prior to joining the UFC as part of the Strikeforce merger, Larkin was sporting an undefeated record, which included a unanimous decision win over current UFC welterweight title contender Robbie Lawler.