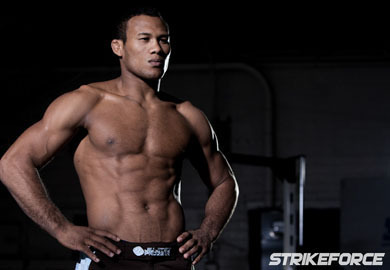 The “Strikeforce: Champions” event scheduled for January 12 in Oklahoma City continued to grow today as it was announced that middleweight fighters Lorenz Larkin (13-0 MMA, 4-0 SF) and Ronaldo “Jacare” Souza (16-3 MMA, 6-1 SF) are set to face off in the cage.

Larkin was set to face Strikeforce middleweight champion Luke Rockhold at the promotions planned November 3rd show. However, the event was canceled after Rockhold pulled out with an injury and the headlining bout between Daniel Cormier and Frank Mir was also scrapped due to injury.

Larkin was then re-booked to fight Rockhold for the 185-pound title on this January 12 “Strikeforce: Champions” show, until Rockhold’s lingering wrist injury forced him to once again withdraw from the proposed bout. Now, Larkin will meet Souza on a show that is expected to be the last in Strikeforce history.

Larkin comes into the fight unbeaten and on the heels of a dominant unanimous decision win over Robbie Lawler at “Strikeforce: Rockhold vs. Kennedy” this past July.

Souza most recently saw action this past August, where he earned a quick 41-second knockout over Derek Brunson. “Jacare”, who lost the middleweight belt to Rockhold in September of 2011, has gone 2-0 with two stoppage wins since losing his title.

“Strikeforce: Champions” is set to take place at the Chesapeake Energy Arena in Oklahoma City on January 12, 2013.