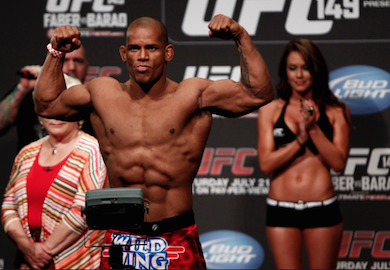 “I believe he’s a great fighter. His record speaks for itself. He beat a who’s who of the sport. But, he’s boring. This is a sport where you have to entertain fans. Because at the end of the day, this is the entertainment business. It’s not like the win business. It’s like, go up there, show your skills and knock people out. He doesn’t have that. He’s boring. He’s boring. That’s the truth. I don’t like to see him fight and I’m a fan of fighting. I’m a fight fan. That’s the way it is, man.”

This weekend in Dallas, Texas, Hector Lombard will look to continue his ascent through the UFC’s welterweight rankings when he fights Jake Shields on Saturday’s UFC 171 pay-per-view card.

During his per-fight media scrum, Wednesday, he discussed the Shields dilemma and what he thinks of Jake.

Think his critique of Jake is fair?