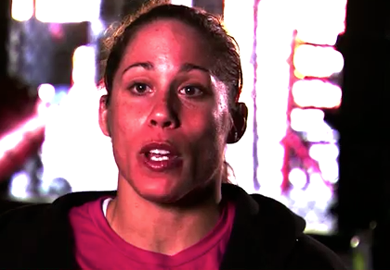 “I honestly don’t think Rousey has what it takes to beat me. The only person that can defeat me is myself. Everybody asks, ‘Yeah, how do you not get arm barred?’ You just don’t get arm barred. You haven’t seen anyone be able to counter is yet so you know if she’s going to put those hands on you you’re flipped over, you’re on your back and that’s the end of it. Practice makes perfect, we’re just not getting arm barred, we’re doing arm-bar defense, attacks, counters. It’s just a matter of having enough practice. I’d definitely prefer to take this to the ground, show her that she can’t armbar me.

I do think that everybody’s afraid of Rousey, that’s definitely one of those things that’s kind of hindered people. I’m not scared. That first round is the most important part of the fight, if I can get through that it will definitely be a defeat in her eyes. This isn’t going to be as easy for her as it was in the past, and that’s probably the biggest hurdle for her…A lot of people say I’m just an easy person to armbar, and I’m OK with that, I’m just looking forward to proving everybody wrong.”