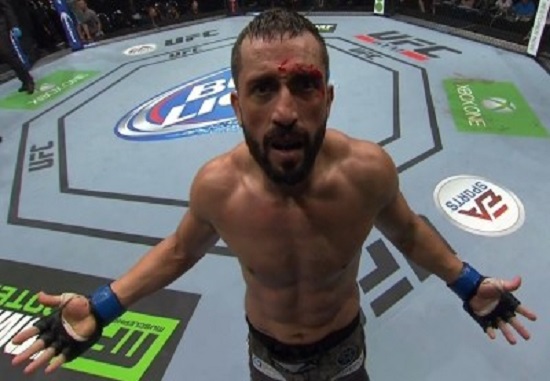 It’s no secret that fighters have extremely busy and demanding lives. From training several times a day to weight cutting for several weeks before a fight, fighters are often busy and exhausted.

Rita Grujic explains the role of being a wife to Vik Grujic, who is currently signed with the UFC, and who was also a guest on BJPENN.com Radio this week (Listen to that HERE).

Rita’s excellent blog entry was posted on bringittoafrica.com, where she told her story with Vik.

My name is Rita Grujic the wife of UFC Fighter Vik Grujic “The Spartan”.
We met 20 years ago at a party in 1995, both 18 years of age. We lived in the same suburb of Broadmeadows in Australia, which was a very rough area growing up. Before I met Vik he was involved in many street fights. He hung around the wrong crowd and always got into trouble of some kind. I think I tamed the Savage Beast in him. We were very much in love and our relationship become very serious rather quickly, we soon got engaged. I was working as a Medical Receptionist and Vik a Commercial Painter neither of us living our dream jobs.

It took us 10 years later to finally get married in 2004. Life was great, I was happily married to the man of my dreams, we bought our first home together, I fell pregnant and Vik working very hard. Over the years we’ve been blessed with three beautiful daughters.
We have struggled and stressed about money a lot, almost losing our family home as recent as last year. Painting wasn’t paying off. Vik worked seven days a week of hard labour then he would train at night. There was hardly any family time. I was a full time mum couldn’t work to help out with the bills. On top of that Vik was diagnosed with thyroid cancer in 2009 which was our biggest fight we ever dealt with. I was so devastated by the news and so close to giving birth to our third child. We fought through a terrible time in our lives but came out on top. He’s my hero!

Vik knew painting was not getting us anywhere, Martial arts was always his passion from a very young age. Though he never thought it would ever get us anymore. After competing in local fights and wining. The opportunity came for him to try out for The Ultimate Fighter Australia Vs Canada. After a very long wait to know the results, Vik got the call at work that he got into the show. He immediately called me and I burst into tears of joy. We knew our lives were changed forever. His dream finally came true after all his sacrifices, dedication and hard work. He deserved this opportunity.

Since The Ultimate Fighter has aired, it has been so exciting and overwhelming to see so much amazing fans from all over the world, showing their continued support through social media, so much love for Vik and for me too as people have been able to connect with how hard we’ve work to raise our family and keep our home. I feel Vik is a great role model for anybody.

Ever since being with the UFC our lives has been changed in many ways. We are very fortunate it has made us a bit more financially stable. But we still struggle to keep our head over water. Though now we have the opportunity to create a life for ourselves we could not have previously dreamed of. This is Vik’s full time job now. No more painting just training very hard 2-3 times a day and more valuable family time. The down side is before a fight Vik has to go train with best to be the best at Alliance MMA in San Diego which means time apart from us up to 6-7 weeks. I go about my daily business of taking care of our three girls, they keep me very busy.
When Vik is back from his fights, we make up for the lost time and spend a lot of quality time together. He even acts as a personal trainer for me at the the gym. We are a family that has known years of hardships that many honest hardworking families should never endure. Vik will always fight for his family!
I’ve always been supportive and extremely proud of Vik from day one with all his achievements. Win or Lose he will always be my Champ!