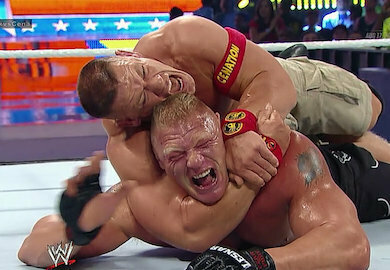 WWE’s Monday night “Raw” was filled with body slams, frog splashes and lots of smack talk, but there was one conspicuous absence — current WWE World Heavyweight Champion Brock Lesnar. Neither he nor his advocate, the outspoken Paul Heyman, appeared on the three-hour program. Not only that, but even John Cena, who was on the brink of a possible win but lost to Lesnar after his match was interrupted by Seth Rollins, didn’t even really indicate he wanted a rematch. The no-show, combined with the the lack of any real promotions of Lesnar, stirred up rumors galore, as it’s basically unprecedented for the biggest title holder to barely get a mention on the the “Raw” directly following a pay-per-view. So, what’s the deal?

One theory purported by a couple of fan sites is that Lesnar may be dealing with a heart condition. The rumor started after “Night of Champions” when fans grew worrisome over Lesnar’s appearance. Via WhatCulture.com:

The current WWE Champion started his match against John Cena with a completely normal look. However, after just a couple of minutes, Lesnar was already sweating profusely and had turned both red and purple in his face. This is normal for someone undergoing intense physical exertion, but Lesnar was barely doing anything of note. A rehearsed wrestling match shouldn’t be turning a man purple. … Fans have noted that in addition to turning red and intensely sweating, Brock also appeared to be struggling for breath. Yes, he’s a big guy, but he shouldn’t be reacting like this. It’s a worrying indicator of health problems such as blood pressure or risk of heart attack.

Concerned fans are getting worked up for nothing, however, WWE officials say. Via an e-mailed statement to The Washington Post, the WWE contends, there is “no truth to the rumors about issues with Brock Lesnar’s health.” The company did not offer an alternative explanation as to why Lesnar did not appear.