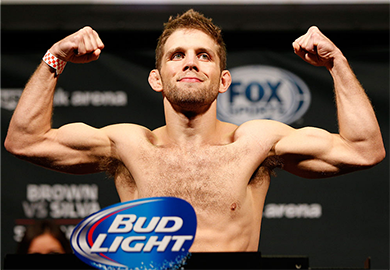 At UFC Fight Night 50, Nik Lentz is suiting up to square off against Charles Oliveira. This is not the first time these two have squared off in the UFC, however, and Lentz claims he was “wasted talent” the first time they fought in 2011.

In a recent interview with MMAJunkie‘s Ben Fowlkes, Lentz professed that things were falling apart at his camp during the training for their 2011 bout.

Lentz was content with going through a sub-par camp for the convenience of it. After all, he was training with the likes of Sean Sherk and Nick Thompson. Once those elite teamates started retiring, though, that was when Lentz realized something needed to change.

“Right at that time, my team kind of fell apart in Minnesota… A lot of the guys I trained with wound up retiring, guys like Sean Sherk, Nick Thompson, Derrick Noble. A lot of my main partners went away and I didn’t have anyone to train with, and instead of being a man and being smart, in my head I was kind of like, ‘Everything’s going to be fine. You can still train. You’re still tough.’… It wasn’t until I started having adversity, started not doing as well as I should, that it dawned on me, hey, you’re really messing this up, and you need to get your ass in gear.”

Since then, Nik Lentz has joined American Top Team, one of the top camps in mixed martial arts, and has since stated that he was a “complete waste of talent” throughout his career before then.