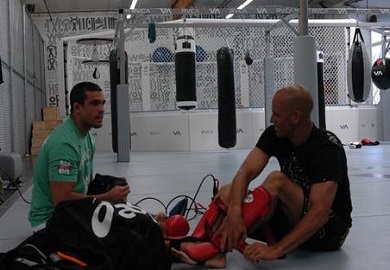 Legendary surfer Kelly Slater, who is signed to RVCA, much like Vitor Belfort and our very own BJ Penn. It’s only fitting that he is an MMA fan.

He spoke about his love for MMA, how people see it as brutality, and even gives his pick for Weidman vs. Belfort.

“I’m a little biased just because I’ve been friends with Vitor but I’ve watched a lot of YouTube stuff of Weidman. I haven’t seen him in person, a lot of friends have seen them both in person. I personally think Vitor is too powerful and fast, Weidman’s wrestling is amazing, his JiuJitsu is world class, really good top game. All that being said I think it will be a good match, but I’m hoping for a Vitor knockout.”

“If I was going to put a dream match together right now, I’d probably want to see Jon Jones and Cain Velasquez fight,”