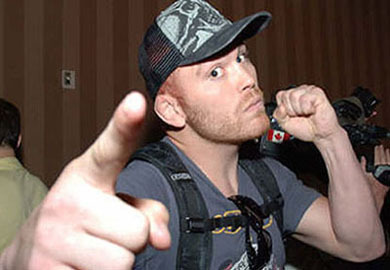 “I’m here in San Diego, training at Alliance and I didn’t realize what I’m missing. It has been so many years since I was a member of a hardcore training team like this. In Hawaii, I was a little bit of a lone wolf.

“No ‘yes men’ here. If I wasn’t doing that great, maybe I could whine a little and get a little bit of a break from my coaches, but that just doesn’t happen here. At first, I thought, ‘They’re pushing me hard.’ Then I realized that it never lets up. They’re pushing me hard, and they continue to push me hard. In order for me to be able to train with these guys, and compete with these guys, I had to do everything perfect. I had to get my rest and stay on my diet. Every day, you’re facing hard intense training with guys who want to be the best. Anyway, it forced me to clean my act up even more. My diet has been dialed in. My rest has been dialed in. In the gym, they’re pushing me harder than I’ve ever been pushed.

“I’m a firm believer every fight is won or lost before Saturday night,” he said. “Having said that, the fight should be in the bag already. I’ve already beaten Andrew Craig in the work I’ve done to prepare. I’m waiting for the fight, to get the money in the bank, and then getting back to train.”

UFC 162 competitor, Chris Leben, tells Ariel Helwani that he is a new and refocused fighter leading into this weekend’s fight against Andrew Craig.