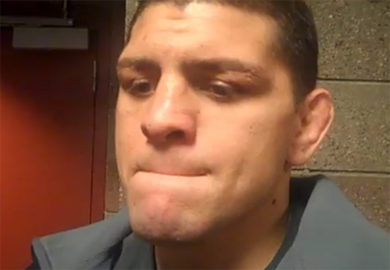 Shortly thereafter news broke that the Stockton native was getting into the MMA promoting business in North California.

Today Diaz’s lawyer Jonathan Tweedale spoke to Ariel Helwani about the new promotion and re-iterated that Diaz will likely stay retired, well unless an interesting match-up can coax him back:

“Of course these guys want to fight him,” Tweedale remarked. “Anyone would want to fight a legendary figure in the sport. The problem is, for them, he’s retired, and unless there’s a very good reason to step out of retirement, I don’t see that changing.”

What that very good reason is, remains to be seen. For what it’s worth, Diaz’s position, however farfetched, has remained consistent. He wants either a rematch against UFC welterweight champion Georges St. Pierre or a title fight against UFC middleweight champion Anderson Silva.

All the same, even Tweedale can’t say for sure if Diaz’s retirement will forever hinge on those two unlikely goals.

“That depends on two things,” Tweedale said in closing. “It depends on whether the fans really want to see him in a really interesting match-up, and it depends whether Nick is willing to come out of retirement and bring the fans a really, really big match.

“It’s just difficult to imagine anything not involving one of those two fighters, at this point in time, that would be sufficient. But you’re right, maybe in three years the landscape has totally changed. Anderson is long retired, GSP is retired, there’s a new welterweight champ that’s held the belt for a couple years. Who knows? You can never predict the future. But as of now, he’s retired, and I don’t see that changing anytime in the imminent future.”

The first event of Diaz’s promotion, WAR MMA, is set for June 22 at the 10,000-seat Stockton Arena in Stockton, California.