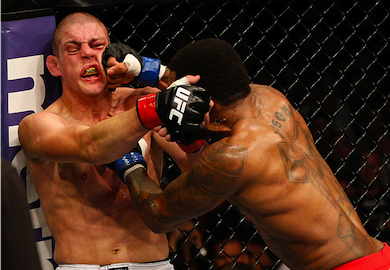 During the post-fight media event, UFC President Dana White said it was the most lopsided fight in the promotions history and for a Lauzon fight that’s almost incomprehensible.

“Dana said it was one of the most lopsided beatings ever,” said Lauzon. “I would have to agree. It was pretty bad. That was me at my worst, but I think you have to give credit to Michael and I was so bad because he was at his best. I watched the fight three or four times and he just did a really, really good job.”

“Michael Johnson is very tough to take down. He’s constantly moving around, he has great footwork and he moves great laterally, from side to side. He does a great job of not coming crazy forward, except when you’re in a purely defensive state. I couldn’t get going and he tagged me with some really good shots, and that was it.”

“It was 100 percent not my night. But I stand by everything I said: I had great sparring partners and I had a great training camp. I was feeling strong. I was feeling fast. I was feeling super confident and I wasn’t looking past him, because I knew how super tough he would be. Just looking at myself, I felt I was in great shape and ready to go and he right off the bat took me out of my game. I never really got started and usually, I like to come out and be really aggressive.

“He had a slight speed advantage on me when we started out at the beginning. If I couldn’t catch him when I was at my best, and fresh, it got even worse when he was inflicting damage on me. He fought really smart. He beat me up a lot in the first and basically took the second and rested and kind of coasted a little bit. Then, he beat me up really good in the third. Give Michael credit – he fought a really, really smart fight.”