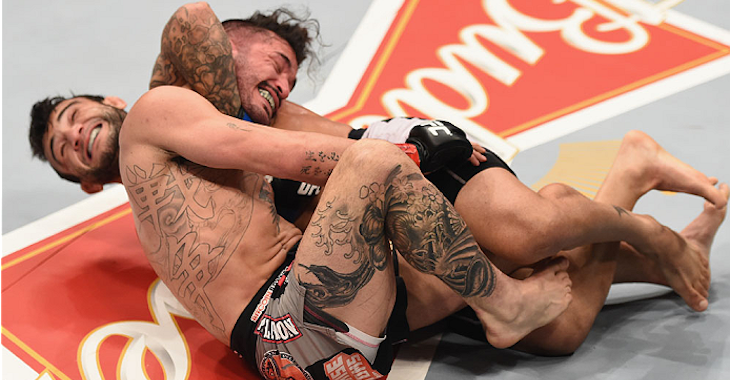 On the latest episode of Team Alpha Male Radio, members Justin Buchholz, Lance Palmer and Cody Garbrandt talked about this past weekends UFC fights and why they think UFC flyweight Ian ‘Uncle Creepy’ McCall lost his fight against John Lineker.

If you haven’t been watching the video podcast, which airs every Tuesday and Thursday, a feud between McCall and TAM started brewing on last weeks show. McCall, while speaking with BloodyElbow, had this to say:

“Team Alpha Male are nice guys, but they come off as the douchiest camp, and I’ve told some of their guys this. They’re the douchebag frat guys of MMA. They walk around flexing with their shirts off, bumping chests and just seem like they would be the guys that would try to bang your girlfriend when your back is turned. Good for you, you’re the coolest guys in Sacramento. There’s only one of you that’s ever going to be champion, and that’s T.J. Dillashaw, and they treated him like the red-headed stepchild for a while. Look at him now, though. He’s the man.”

During the most recent podcast, Lance Palmer gave his thoughts on why McCall lost his fight at UFC 183.

“McCall’s there, he’s getting his mustache greased, getting ready to go into the cage and I pop my shirt open, I start chest bumping with [Joseph] Benavides and Benavides starts yelling “douche bag, douche bag, chest bump, chest bump,” and T.J. [Dillashaw] and Danny [Castillo] are doing the same thing right next to us. McCall looks over and just kind of gives us a shit eating grin, just like ‘yeah I see you guys.’ I think that helped f*ck him up a bit too, besides the podcast.”

Make sure you check out the show at www.teamalphamaleradio.com. We have embedded the segment of the show in question below for you to catch more on the subject. It’s worth a few minutes of your day!