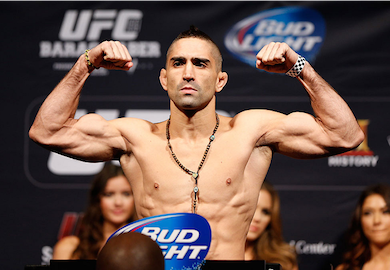 Top ranked UFC featherweight Ricardo Lamas joined BloodyElbow.com to talk about his upcoming fight with Hacran Dias, and what he did wrong in his fight against Jose Aldo.

“Preparation is going great. He’s a tough guy, I’m not taking him lightly” Lamas said. “He’s very strong. and likes to control people on top and grind them out. I’m 100% concentrated on Hacran Dias right now and not thinking about anyone else. “

I just didn’t fight like myself” said Lamas. “With a title riding on the line I didn’t want to make too many mistakes and I was too conservative. I learned a lot from that fight and won’t ever fight like that again.”

“I was too tentative and you can’t beat Aldo like that.” said Lamas “Nothing he threw at me hurt me”.

As usual when talking about the featherweight division, the talk shifted to Notorious Conor McGregor, who was rather vocal about what he thought Lamas did wrong in his fight against Aldo when he said: “He didn’t fight to win. He fought to compete.” Lamas had the following to say about McGregor:

“I don’t pay attention to that guy. That’s exactly what he wants. He’s just a loud mouth, and very unoriginal. I have been eating, sleeping and breathing Hacran Dias since the day I signed the contract. He’s in my sights now. Everyone else will have to wait.”