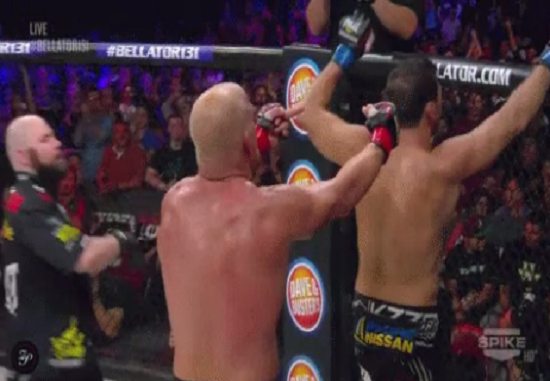 Nate Diaz’s manager, Scott Kogan, was in attendance at last weekend’s Bellator 131 event and after watching an “amazing” night of fights, he is now convinced that Bellator has found it’s “edge” over the UFC. His words (via bloodyelbow.com):

“It had an edge – a little entertainment,” Kogan told BloodyElbow.com. “I think people try to portray fighting as a sport too much. It’s a sport, of course, because they are competing and they are athletes. But it also crosses over into entertainment. It is not the same as watching a tennis game, and we shouldn’t make it be that way.”

The major difference between the UFC and Bellator this past Saturday night, according to Kogan, was that Bellator featured their stars prominently, while incorporating lights, music and video to add to the overall atmosphere of the evening’s action:

“What makes stars shine, besides fighting well, is allowing the audience to connect to their personalities and you can’t do that unless you are able to shine through it.”

With Scott Coker now leading the Bellator promotion, Kogan believes that Bellator could give the UFC some serious competition in the future and explained how it would be a good thing for the sport:

“It is important for the sport,” Kogan explained. “Of course you need another organization. You need to have another platform where fighters can go fight. What you shouldn’t have is every idiot who can con somebody into giving them $10 million getting into the MMA game. They should go find something else to invest in. But when you have a solid promoter like Scott [Coker] with a giant like Viacom, why is that a bad thing?”

What are your thoughts on Kogan’s recent statements? Sound off Penn Nation!