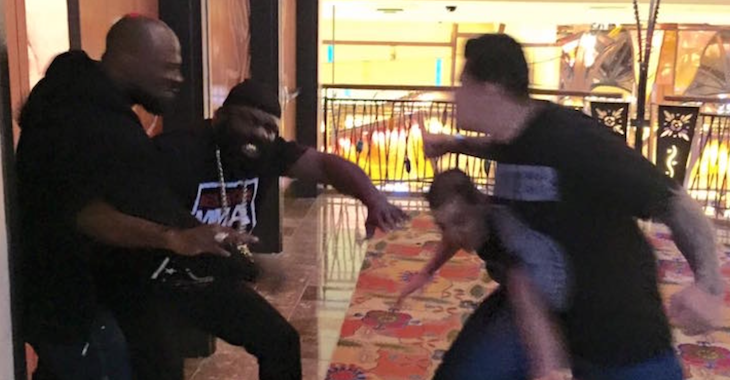 Recently, ahead of Bellator 134, news broke that Bellator MMA fighter King Mo and Triumph United President Hans Molenkamp were involved in a brief scuffle in a hotel lobby (See that HERE)

Molenkamp alleged that the scuffle started after King Mo called him, “Rampage’s bitch”, however King Mo continues to tell a different story.

“Hans, I don’t know what the deal with that dude is, man. I thought we was cool. I knew him. But he started acting weird because he started gravitating toward Quinton (Jackson) so he didn’t really talk to me. I was just talking with (Kevin ‘Kimbo Slice’ Ferguson), and I was just joking around with Kimbo. We were clowning, going back and forth, and Hans thought I said something to him. I don’t know what he thought I said because I wasn’t talking to him. I was walking off, and he tried to push me, and I was like, ‘what?’ And he started swinging on me, and I was like, ‘What is going on?’

“He tried to say, ‘I’m not Quinton’s bitch,’ or something like that. I never said nothing about Quinton period. And he started swinging on me, and Kimbo held me back, and some dude he was with said something to him and held him back, and that was it. I was like, ‘I can’t get caught wasting my energy with this dude because I’ve got Kongo tomorrow.’”

“Hans owes me an apology. He’s lucky I didn’t Josh Neer his b-tch ass. Him swinging on me for saying something? I wasn’t even talking to him. I was talking to Kimbo, and when I turned my back, he’s going to push me? And when I turn around, he’s going to swing on me? Luckily Kimbo was there to hold me back ,and somebody was there to hold him back, or I would have Josh Neer’d his b-tch ass.”