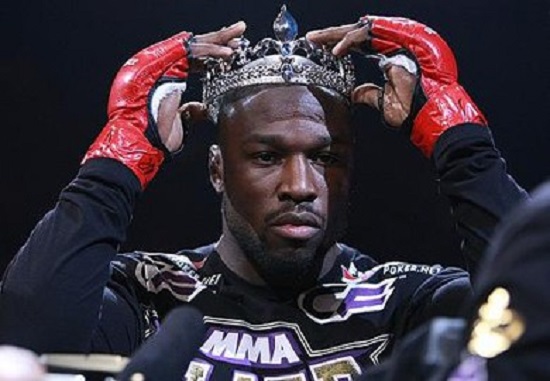 Since then the rivalry hasn’t died down, with King Mo and Tito engaging in a Twitter beef (See that HERE).

King Mo spoke to Submission Radio about his rivalry with Tito, and why the bout won’t happen.

“If it was up to me, I’d put him out. He won’t fight me so I don’t want to talk about it because I know he ain’t gonna fight me. He’s talking all this stuff about ‘He lost to Quinton, we all saw it.’ Yeah ok, you saw what? We all saw, [Rampage] asking for a rematch because he knows he lost. You know, come on, but for him to say that he thinks I lost to Quinton, then I might as well think that hey, I guess [Tito] thought he lost to Forrest Griffin too then; because he was awfully mad both times he fought Forrest, you know what I’m saying?”

“He was talking behind my back saying ‘well fighting Mo does nothing for me. He lost to Quinton, blah blah blah’ you know. And when I saw him he was like shaking my hand and trying to be smiling to my face. If you don’t like me, don’t like me. Just keep it real. If I don’t like you, I’m not gonna talk to you, you know what I’m saying? He’s fake. He’s fake. Keep it real. Don’t be a slick side hater. Don’t be slick with it, be real.”

“It’s like this, Tito dyes his hair blonde to be likable or something. He does something to be likable. That’s why he dyes his hair blonde and he’s Tito Ortiz. I’ve never seen a Mexican guy with blonde hair. I’ve … never seen a Mexican with blonde hair. So I think he’s trying to play both sides. He’s Tito Ortiz, he’s blonde hair, mister nice guy, half American. He carries the American flag and Mexican flag, great. So he tries to get both fans. He tries to play a nice guy, but he’s really not nice. Like I said, he’s fake. So to me, everything about him is bogus, you know what I’m saying?”

When King Mo said he would “Django” Tito, many fans understood the reference to Quentin Tarentino’s movie ‘Django Unchained’ but were unsure of what King Mo meant.

“Well, f— him up. There’s that one part – there were a few parts – where Django’s looking for his girl and the dude was getting whipped and he walked up and was like ‘Hey, ya’ll wanna see something?’ and he went up there and starts beating him and shoots him. You know what I’m talking about? The slave guy? That part – Django. And another part at the end where he shoots Steven in the knee caps and he kills everybody in the house – Django. You know what I’m saying? He goes out there and he straight clears everything and he takes care of everybody, and that’s what I would do with him. I’d wipe him. I would just squish him. I would destroy Tito and it’d be easy work, you know what I’m saying? He doesn’t want to fight me. He knows. What’s he gonna do, outwrestle me? What? Out-strike me? What? Out speed me? He’s not stronger than me. He’s big, but he’s not stronger than me. I’d muscle him around, I’d control him. I would smash him. Hulk smash, that’s what would happen.”

Do you want to see Ortiz and Lawal go head to head in the Bellator cage?