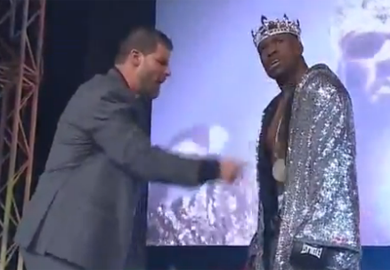 “I had to change shirts. I didn’t know what to expect. The people didn’t know who I was. They respect me because I respect the sport. The fans could have booed me or not cheer for me. I was happy that I got some kind of pop. I was cool with the reaction. I would have been in trouble if I got no reaction. That was my main concern.”

“The wrestlers were cool. They respect me because I respect wrestling. I know a lot of old school wrestlers, their moves, etc. I was a huge wrestling fan growing up and now I’m stepping into their world and training to do it.”

“That s— is hard. People don’t understand this s—. People think wrestling is all fake. If you think it is fake, come try it out and you will see how real it really is.”

“MMA fans never grew up fighting. They just put on their Affliction or Tapout shirts and say, ‘Hey I’m a fighter or hey I’m going to a fight.’

“To me, its a joke. It is a certain demographic that’s involved and I’m not with that.”

The first fighter to cross the bridge into pro-wrestling full time, Mo believes his wrestling routine is just as real but much harder than MMA.