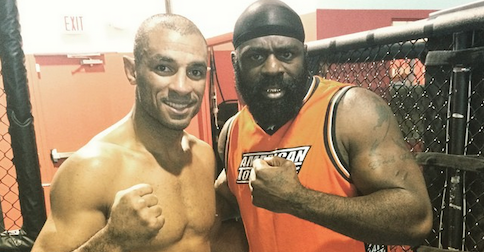 “I don’t even know who’s there right now (in Bellator) as heavyweights. But s**t, anybody. Just feed me. I’m ready to be fed.

…
“I’m sure they would. I mean, they should. I mean, I would love to, (rematch Seth Petruzelli). I owe that dude one. The nature of it, I could complain all day long on this and that, but s**t, it just went down the way it went down, but goddamn I owe him one.”

“S**t, you know they could put Tito (Ortiz) on that plane, too. For sure. I got a bone to pick with that dude, man. Ain’t no problem with him yet, but you know, from back in the Strikeforce days, I was handling s**t about him calling me out and talking s**t about me, so yeah, we could definitely put that in the making. He’s gotta have a problem with my hand game.”

During a stint on today’s edition of The MMA Hour, Kimbo Slice discussed a few potential names for his Bellator MMA Debut.

Who would you like to see the street-fighting legend debut against?