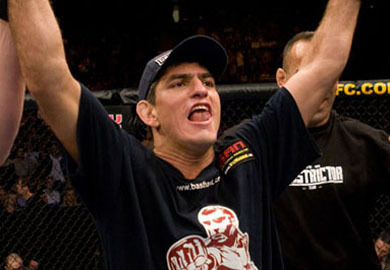 An exciting welterweight fight has been added to the UFC on FUEL TV 6 card as Paulo Thiago takes on Dong-Hyun Kim. Tatame spoke with Thiago as he revealed plans to fight in China in October.

Thiago is coming off of a brutal knockout loss at the hands of Siyar Bahadurzada in April and will surely be looking to get a win streak started as he is 1-3 in his last four fights.

For Kim, a disappointing and strange loss at the hands of Demian Maia at UFC 148 halted Kim who looked to regain momentum. Kim was injured during a takedown attempt and could no longer fight.

Thiago gave credit to his opponent and mentioned his motivation coming off of such a decisive loss:

“He’s a tough guy with many skills. He’s tall, is great at Judo, has good takedowns. He’s a complete fighter. He lost to Demian because for bad luck. Now I have this confrontation ahead of me. I’ve watched his tapes and I always thought he was dangerous. Now I’ll watch it carefully and looking for his flaws and a way to win this fight.

Thank God they gave me this fight. I was calling Wallid and asking him about my fight, anything. Asking about the card for Brazil and all. I had a campaign for me to fight in Brazil, but it was a present for me to fight in Macao. That’s it. I’m very motivated and I want to get there and win this thing.”

Stylistically, this will be a great matchup and a much needed boost up the ladder for one of these fighters.

Stay tuned to BJPENN.com for the latest MMA news and updates.