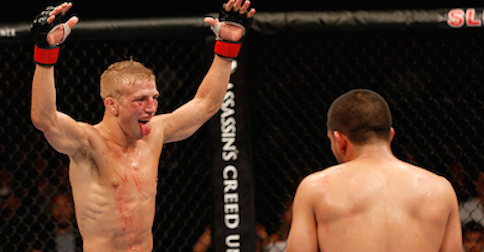 “I feel like this is still a very marketable fight based on how good of a champion he was and fighter he was the last decade. I feel like that’s the fight everyone wants to see. It didn’t get to happen in Sacramento, so there is even more build up now. It sucks that my last three training camps have been for Renan Barao, getting ready for the same guy, but it’s also a blessing as well. I know what Barao is going to do and I’ve been training for him for a long time. I get to continue where I left off and surprise him, as well. I’ll show him some things I’ve added to my game. I plan on finishing him a whole lot faster than I did the first time and get this guy behind me and put him on the back burner. I’m tired of hearing this guy’s name and I feel like I am just his kryptonite. I am going to demolish him this fight.”

– Quote via The MMA Hour.