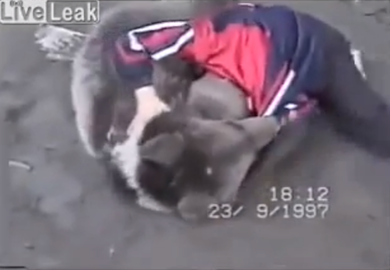 UFC lightweight Khabib Nurmagomedov will fight Rafael dos Anjos this Saturday on the UFC on FOX 11 preliminary card. A video surfaced on the internet a few months ago that apparently featured a then nine-year-old Nurmagomedov wrestling a bear cub.

During a recent interview with Combate.com, the UFC lightweight confirmed his involvement in the bizarre scene.

“Yes, I was. It was a secret video and I do not know how that got on the internet. That was long ago, I almost do not remember, I was a boy at the time.” via translator

check the video out below: