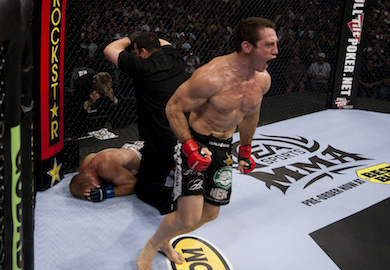 Tim Kennedy is never one to bite his tongue and refrain from speaking his mind, so it shouldn’t come as a shock to fans when he took a very firm stand against steroids.

“I get so much crap from everybody. Like, ‘shut up pussy, why don’t you just use it yourself and actually have an exciting fight?’ It’s non-stop relentless, especially from Vitor fans or Chael Sonnen fans. Listen, I get it. They’re fun to watch. But so was Sammy Sosa and so was Barry Bonds and Mark McGwire. They almost destroyed the sport of baseball. Those three dudes alone almost ruined baseball. That’s where we are right now in the sport. We’re in the Barry Bonds, Sammy Sosa, Mark McGwire era where it’s just rampant, crazy use of PEDs. And Mark [Bocek] that just retired, you know, he’s saying up to 90%. I said around 30%. Okay, fine, we’ll split it, like split the difference. That’s crazy! That is a huge problem. And we’re not hitting a ball out of a park. We’re hitting each other in the head. This is a little different. So the standards should be different and it’s not. It’s worse. Something’s got to give.”

Tim Kennedy spoke on a recent episode of Fight Opinion Radio on the steroid problem in MMA.